Top 3 ways you can raise a complaint with the IRDA

Let us investigate the top 3 ways a policyholder can lodge a complaint with The IRDA of India.

The IRDA has put into place an online grievance management system called as The IRDA Integrated Grievance Management System (IGMS). The IGMS system can be accessed through the IRDA website, and can be used to do the following:

If the policyholder so wishes, he or she can even personally visit The nearest IRDA office and lodge a written complaint against the insurer. Once at the office, kindly ask for the complaints department of the IRDA and furnish your complaint letter to the officer. Do remember to take an acknowledgment of the same.

IRDA has 3 main offices across India.

As mentioned above, there are various ways you can contact The IRDA and initiate a complaint against your insurance company.

An insurance surveyor is one who assesses the damages that have occurred to the insured object/person. It is the role of the surveyor to investigate the case, note down the observations, and disburse a case report to the insurance company.

As you can imagine, the role of an insurance surveyor is pivotal in the insurance sector, and all surveyors need to be registered with the IRDA of India.

Step 1: Go to Google and type in ‘IRDA surveyor list’ 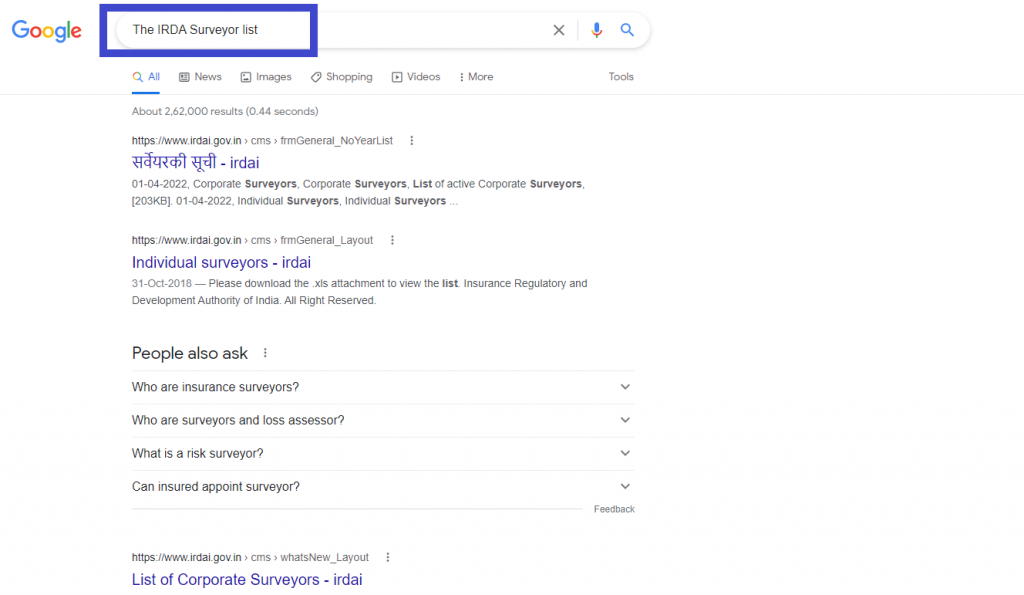 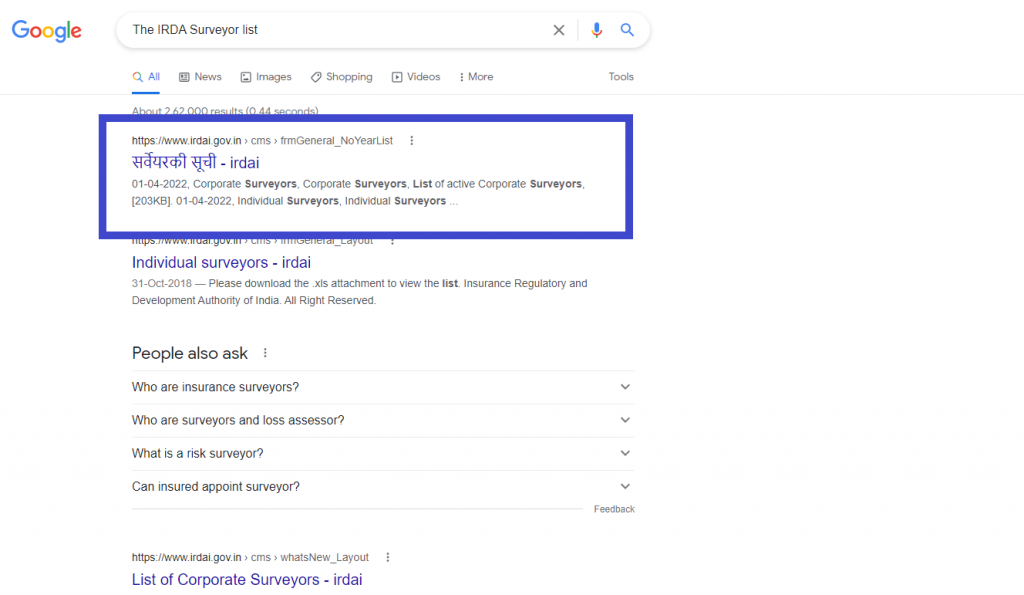 Here, you can download a complete list of authorized IRDA corporate surveyors as well as IRDA individual surveyors.

Step 4: Find out if a surveyor is registered with the IRDA

What are the top 10 most important powers of the IRDA?

Let us look at the top 10 most important powers bestowed upon the IRDA by the Indian Parliament.

Top 10 most important powers of the IRDA

Which committee recommended the establishment of IRDA (And Why?)

The committee was formed in 1993 and provided its recommendations in 1999.

Recommendations of the Malhotra Committee

Let us briefly list the most important recommendations of this committee:

Why was the formation of IRDA recommended?

The Malhotra Committee wanted the governance and regulation of the insurance sector to move away from the finance ministry to an independent governing body (which would later be the IRDA). This recommendation was made with the understanding that an industry specific institution would better regulate the industry due to its specialized nature.

The IRDA was formed in 1999 under the watchful eye of the Indian Parliament through the IRDAI Act, 1999.
The committee also recommended certain primary functions of The IRDA which we will touch upon below.

Primary functions of The IRDA

Formation of the IRDA along with the liberalization of the Indian Insurance Sector were two major inflection points that unleashed the explosive potential of the insurance sector in India.

Frequently asked questions about IRDA , and The Malhotra Committee

All you have to do is either punch in your insurance agent’s Aadhar ID or PAN ID, enter the captcha and press on enter. Once this is done you will immediately be redirected to the results page where you will be shown whether your agent is a registered agent or not.

Step 1: Search for the official IRDA website on your preferred search engine 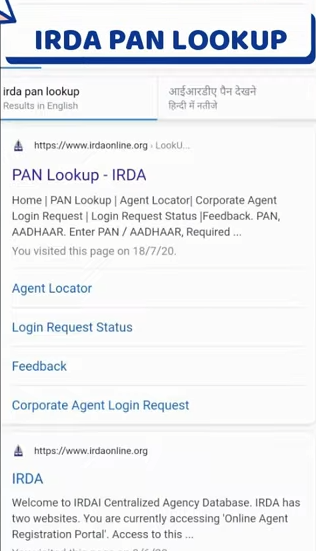 Step 2: Enter the PAN ID or Aadhar ID of your agent in the box 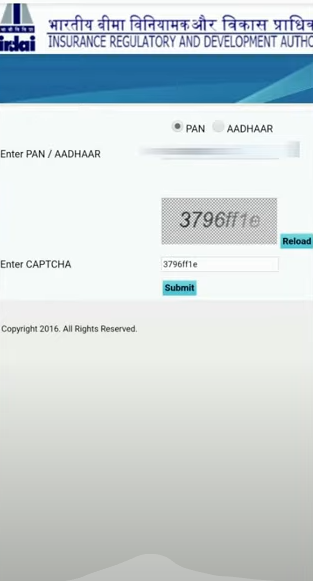 Enter the captcha and press “Submit” 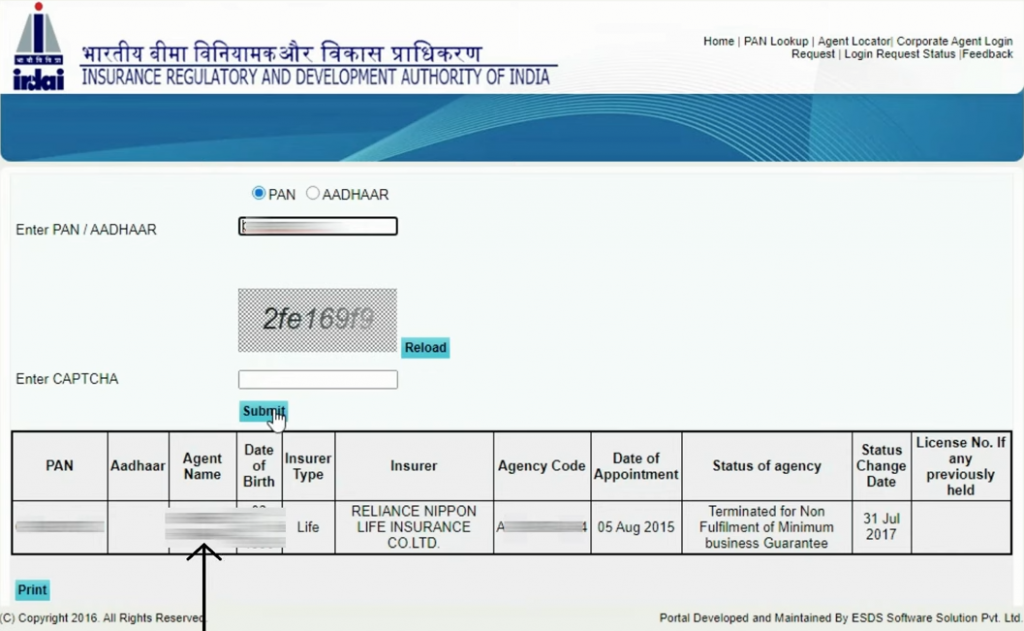 You will be able to find out the following information within the results page if your agent is registered under the IRDA:

Importance of being registered under IRDA

An excellent grievance management system is something desired by all customers, isn’t it? All of us as consumers want our issues to be resolved quickly and without any hassle, and this is expected from all the industries, even insurance. So, to fulfill this expectation of its customers The IRDA as the regulator of the industry launched the Integrated grievance Management System.

It is an online customer grievance or complaint registration system launched by the IRDA in 2010. It is like a portal for the customers to connect with the insurers and get their issues resolved.

The IGMS has the online complaint management system of all the insurance companies linked to it. The customers can not just register their complaints but also track the progress of their complaint resolution. The Integrated Grievance Management system or the IGMS to the insurance policyholders also provides the facility to register their problems through a gateway in case they are not able to directly connect to their insurance company for some reason.

The IGMS also serves the purpose of being a tool to monitor the grievance redressal policies, methods, and duration of different insurance companies. The IRDA keeps a real-time and close watch of the complaints and their progress through the IGMS.

Every complaint or issue that an insurer has must be first registered with the insurance company and only if needed one should escalate it to the IRDA’s consumer affairs department. You must use the IGMS if your issue or issues are not solved by your insurer after 15 days of registering it.

If a policyholder registers a complaint with the IGMS, it is updated on the insurer’s system as well which is mirrored on the IGMS.

What are the steps involved in the process of registering a complaint on IGMS?

There are three simple steps involved for registering and tracking your complaint:

The IGMS is a comprehensive tool. It not only keeps a track of the complaints but also can classify them based on the pre-defined rules which are fed into it.

It assigns, stores, and tracks unique complaint IDs. It is also programmed to define the “Target Turnaround Time (TATs) on all complaints and also keeps a record of it. It sets and sends alerts to the insurance companies regarding the pending tasks or if a complaint is about to exceed its assigned TAT.

It also has the ability to automatically trigger actions based on the rules of workflow programmed into it.

The IGMS is a way for the IRDA to know the needs and expectations of the policyholders in a better way. And as responsible consumers, it is our responsibility to make the best use of the IGMS by providing the right information about our complaints and co-operating with the Insurance companies and the IRDA.

You trust your insurance companies for the safe-keeping of your future, the dearest of your people, and the most valuable assets of yours. It surely might have crossed your mind that who makes these insurance companies trustworthy? Who ensures that they keep up with your belief and expectations? Here’s something to answer these questions.

It is the IRDA or the Insurance regulatory and development authority which works towards protecting the interests of the policyholders. It is the one that ensures that you don’t lose your hopes for a safe future.

It sets rules, regulations, and guidelines for the working of insurance companies, agencies, and intermediaries. It controls the insurance industry in India. The IRDA also regulates the rates and other charges related to insurance.

The sole objective of the IRDA is to ensure that the provision of the Insurance Act is enforced appropriately followed in a way that benefits the policyholders. There are various functions it performs to fulfil its objective and purpose of establishment.

Let’s take a deeper look into the functions of Insurance regulatory and development authority.

Along with all of these, one of the important functions of Insurance regulatory and development authority is to guarantee the policyholder that the best of their interests are being taken care of.

The Current Chairman of the Insurance Regulatory and Development Authority is Dr. Subhash C. Khuntia. He took over the position in May, 2018 and his tenure is of three years from the date of joining.

Dr. Subhash C. Khuntia has had a career of over 36 years in Civil services. He has worked as a Chief Secretary under the Government of Karnataka and previously he worked as the Secretary of School Education and Literacy under the central government of India in the ministry of Human Resource Development (HRD).

His appointment as the Chairman was announced by the department of personnel and training after the Financial Sector Regulatory Appointment Search Committee (FSRASC) confirmed his candidature. In 1981, he was appointed to the Indian Administrative Service (IAS). Mr. Khuntia belonged to the Karnataka cadre. He has served in various departments under the government of Karnataka at various posts.

Dr. Subhash C. Khuntia, the Chairman of Insurance Regulatory and Development Authority is an alumnus of the India Institute of Technology (IIT), Kanpur. From IIT Kanpur he completed his post-graduation in Computer Science and Physics. Furthermore, he has a Ph.D. in economics and is a graduate in Law. He hails from the Jagatsinghpur district of Odisha.

× Send us a WhatsApp Message